Signup for our newsletter

[thrive_2step id=’1375′]Click here to get the latest PAAWS RI news.  Learn about the newest adoptable cats, fun events and other ways that you can help![/thrive_2step]

We are pleased to announce this update on Wilson!

As many of you know, Wilson has been hospitalized at our shelter since April. That’s a long time to be in a hospital, and it is because of our wonderful donors that Wilson has been able to recover so well.

When he came to us, he was missing more than half of the skin on his front leg between his elbow and his wrist. Poor Wilson was limping badly.

After three surgeries, and so many bandage changes that we have lost count, several rounds of antibiotics, and reconstructive surgery by a veterinary specialist, we are happy to report that Wilson’s leg is now 100% healed. 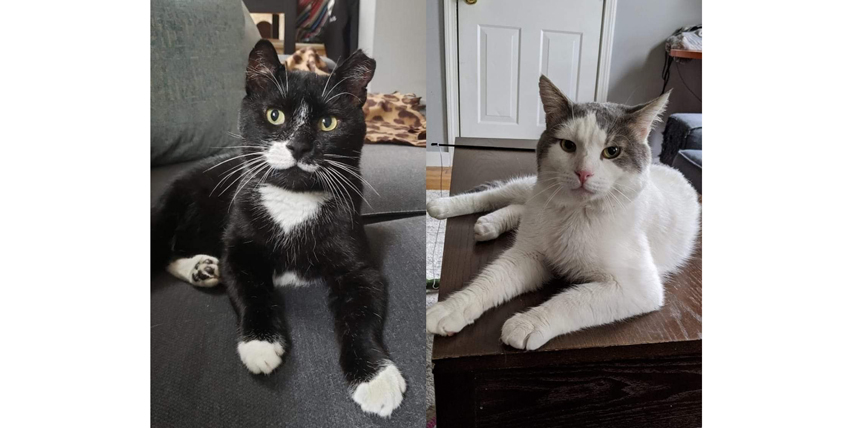 Recovery for Wilson has been a long road, but it ended in success, all due to the generosity of the PAAWSRI Community.

Wilson was then transferred to Scruffy Paws Animal Rescue to be adopted.  While he was patiently waiting for the right adopter to come along, he made friends with another shelter cat named Mac (the kitty on the right!).  The two boys became good friends and would hang out together whenever possible.

Finally, a wonderful person came along who wanted to adopt Wilson, and, to everyone’s surprise, she adopted Mac too.  A very happy ending for all!

A very special thank you goes to all the awesome people who donated to Wilson’s care.  Our PAAWS RI community raised over $600 for Wilson.  Thank you so much again for your support!

A big congratulations to Wilson and his new fur-ever home with his family- both fur and human!

We could not have had the time and resources to help Wilson find his forever home without the support of people like you, who choose to give PAAWS RI your attention by reading Wilson's story. We hope that your heart's been touched by Wilson's story.

If you would like to help more cats in need like Wilson, please consider donating to us by clicking the link here.

Thank you, from the bottom of our hearts, Wilson & the PAAWSRI team.